Having received a full 64 car entry two months before the event, Darlington & DMC have decided to take a further 8 entries making a maximum grid of 72 cars.

Club Chairman and event Secretary, Terry Wright, commented ‘ I always felt that there was a demand for a true clubmens event aimed specifically at the two wheel drive competitor. The entry filling up so quickly has proved this. All we have to do now is provide a slick event to compliment the competitors faith.’

The event is designed to reflect the early days of Rallycross, something the DDMC is familiar with, with races run classless, a quick turn round and everyone in with a chance of an award. Every competitor will have the opportunity of a Final, something started by the late Bill Chesson, and the class awards will be extracted from the overall results.

The event is open to all 2wd cars which comply with Rallycross MSA Safety regulations, have an MSA log book and the event aims to give the competitor, and spectator, close racing, full grids and a quick turn round.

Every competitor will get a chance of a Final and all the races will be run without classes, ensuring that 90% of the races start with a full 8 car grid.
Regulations and Entry forms are now on this website under the "Regs & Forms" section.

Competitors will be allocated garages in order of receipt of entry. Drivers are asked to enter early in order to help us organise the event. NO entry fee's will be charged until 7 days prior to the event on November 8th.

Please support the BTRDA/DDMC and Clubmans Rallycross by racing at this event, which will be a taster of things to come in 2014.

All enquiries regarding this event and BTRDA Clubman Rallycross in general, including sponsorship opportunities should be made to;  clubmansrallycross@yahoo.co.uk 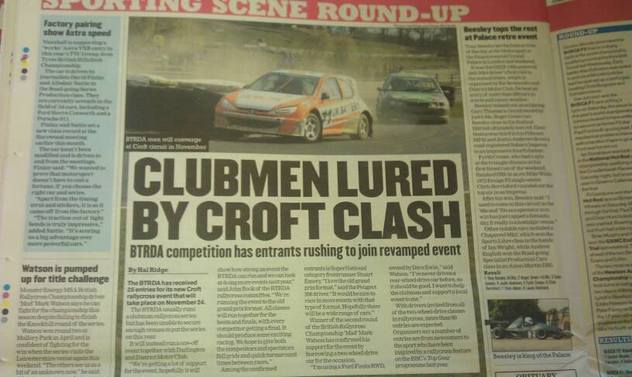 The BTRDA Rallycross committee are working extremely hard to the BTRDA Clubmans Rallycross Championship back up and running for 2014, with a stand alone championship.

Plans are also being made for a BTRDA 75th Anniversary Rallycross Masters event to take place towards the end of 2013.

All enquiries regarding Clubman Rallycross, including sponsorship opportunities should be made to;  clubmansrallycross@yahoo.co.uk

BTRDA Clubmans Rallycross On The Road

On Saturday the 4th May the BTRDA Clubmans Rallycross Championship was on show at the Pirelli Rally Village, near Carlisle

It is with great disappointment that we have to inform you that the MDA/BTRDA Clubman's Rallycross Championship will not take place in 2013. It was a hard decision for us to make but we realised that it had become increasingly difficult to ensure that we were going to be able to provide drivers with a good, meaningful Championship.

Our recent research indicated that there would not have been sufficient Clubman competitors to make running the meetings financially viable despite receiving excellent support from all of the circuits with whom we have been negotiating, and it is really regrettable that we will not be able to benefit from this. We also had an obligation to those circuits to advise them of our decision at an early date to enable them to continue with their plans for 2013.

Lydden Hill Motor Club have recently confirmed to us in writing that they have decided not to offer any MSA British Championship events to the Clubman's Rallycross Championship in 2013.

Clearly the economic climate has also played its part with a continued decline in competitor numbers (although in Belgium their Club championships thrive). Had we been able to consistently attract SAY, a minimum of 40 competitors to each round, we would have been able to continue as a stand alone Championship, but it appears that this will not be the case.

We feel that it is important to you that we communicate our decision as soon as possible and we thank you from the bottom of our hearts for the support that you have shown us over the past years. We, like you, are all very passionate about the sport and repeat that we are desperately disappointed at not having a Championship in 2013.


Plans for 2014 and beyond are already being explored by both MDA and BTRDA, and you will be kept informed of developments. There are no promises, and we are acutely aware of what has to be achieved. We know that Rallycross clearly needs Clubman competitors in order to keep the sport sustainable.